Elizabeth May and Wi-Fi

September 12 2011 update: Pretty River Academy, a private kindergarten/grade 12 school located  in Collingwood, Ontario, has banned Wi-Fi from their premises, basing their decision on the same flawed research data used by Elizabeth May. The school will instead use wired networking technology to provide Internet access to their students, increasing the chances that someone will be injured tripping over a loose network cable.

“Interesting and informative session on electromagnetic frequencies and Smart Meters. So glad I don’t have Wifi at home.”

“It is very disturbing how quickly Wifi has moved into schools as it is children who are the most vulnerable.”

The moment I read those tweets by Elizabeth May, leader of the Green Party of Canada and MP for Saanich-Gulf Islands, I was furious. Once again, a politician learns a bit of “scientific information” from undisclosed and questionable sources, and suddenly becomes opposed to technology that has existed in various forms since 1887. Her beliefs on the alleged effects of Wi-Fi radio signals on the human body are so wrong, she has discredited both herself and her party.

Be advised however that radio waves can be dangerous if you do something silly such as lean against a commercial radio or TV transmitter, which are powerful enough to cook you in the same way a microwave oven cooks your food. But move just a few meters away from the antenna, and these same radio waves quickly lose their ability to heat you up.

Unlike radio and television transmitters however, the radio waves generated by cell phones, Bluetooth headsets and Wi-Fi routers are so weak that, even with the antenna resting against your body, any heat generated by these devices is immediately dissipated by your body’s internal cooling system.

But what exactly are radio waves? Here’s a simple primer. 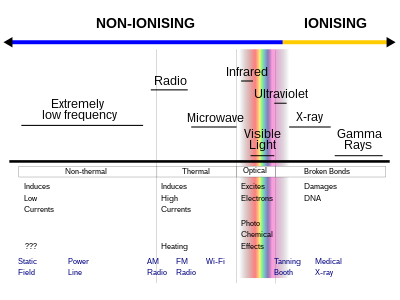 Radio waves are a form of radiation whose frequency range is located below the visible light spectrum. Radiation in this area of the frequency spectrum is known as “non-ionizing radiation.” The only injuries this radiation can inflict on you are burns, and only at extremely high power levels close to the transmission source.

Ionizing radiation however begins at the frequency of ultraviolet light, and at high levels will definitely play a bad game of ping-pong with your body. This form of radiation will alter the bonds between your atoms, modifying your body’s molecular and DNA structure, and potentially create nasty forms of cancer that can kill you. Even ultraviolet light, the lowest form of ionizing radiation in the frequency spectrum, is powerful enough to give you a sunburn and potentially skin cancer.

The type of radiation that worries Elizabeth May the most is non-ionizing radiation generated by Wi-Fi devices whose power levels are so weak that, based on existing research data, are completely ineffective at damaging you in any way.

Following the public backlash over her tweets, Elizabeth May posted on her party’s blog a list of studies on the effects of non-ionizing radiation from cell phones on the human body. However, the conclusions reached in her cherry-picked list of studies were already being disputed by other researchers. Despite this, May (and the World Health Organization) have interpreted these incomplete and unconfirmed conclusions as meaning “we haven’t found the smoking gun yet, but we’ll assume the worst and act accordingly.”

Radio technology has existed for well over a century, and has helped transform our world in ways no one could have ever imagined. Information that once took months if not years to be disseminated is now being distributed at the speed of light. Information on how to improve our health and our lives is now readily available, and has dramatically increased our life expectancy in under a century.

Unfortunately, radio technology has also made it possible to disseminate false and misleading information about these very same technologies. For example, Elizabeth May posted her anti-Wi-Fi tweets from her BlackBerry.

Knowing that there’s still no conclusive and replicable evidence to demonstrate how cell phones can have any adverse long term effects on the human body, how can a Wi-Fi radio operating at one-tenth the power level of a cell phone have any noticeable effect on you and your family?

Whenever someone in a position of authority and influence manipulates scientific research for their own personal gain, it harms us all. The dissemination of false and misleading information not only instills unnecessary fear in the population, it can also have serious and potentially fatal consequences. And with many people now realizing that Elizabeth May’s views on the dangers of Wi-Fi radio signals are completely wrong, will they now believe that her views on Global Warming might also be wrong?

Some politicians really need to think before they tweet. 5 Responses to Elizabeth May and Wi-Fi